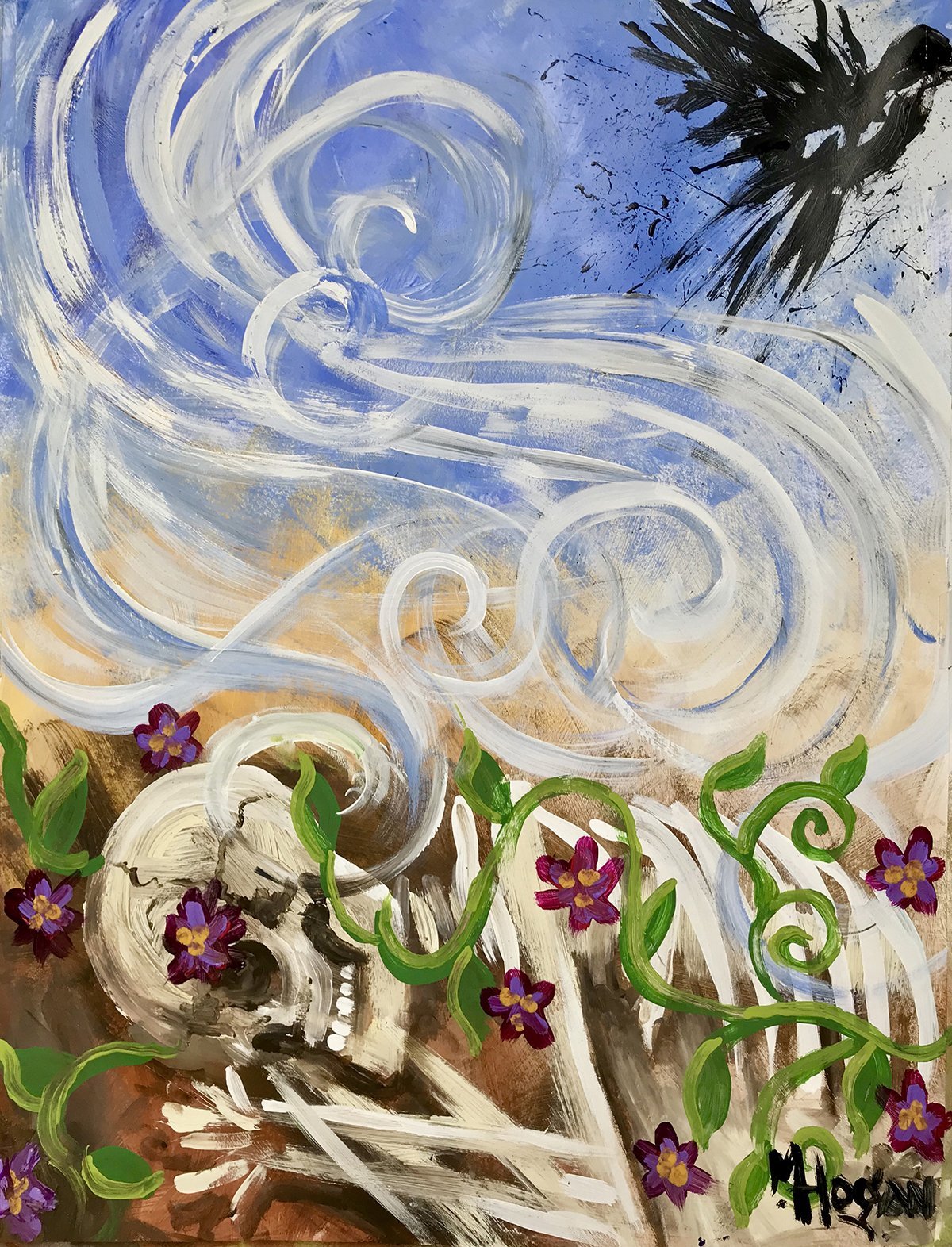 It feels like it’s been ages since I’ve painted during a worship service, let alone painted as my husband played drums on the worship team. We love it when we get to use our gifts in tandem worship. We’re just better when we’re together.

I’d decided during the week to give myself much grace in the process of listening for God’s voice and discerning what He’d like me to paint. Earlier on, it freaked me out when He remained silent, but I guess through the years I’ve learned to trust this dance of ours…having watched as He made His way around the dance floor…moving people into places, lining up stories and hearts, creating moments in time that don’t exist outside of Him. It is nothing short of breathtaking.

So I guess I should’ve known the extraordinary was beginning to stir as I prepared for the Sunday service. Not a single word from Him. Not a peep. Not a momentary perception of a possible leaning in some direction. But my heart was at peace in the silence and I was still able to call up that mental checklist, gather up my supplies with surprising ease and place them by the door in readied anticipation. And my heart continued to wait.

Maybe in the shower the next morning, as I washed my hair…maybe then I’d sense that undeniable knowing. Nope. Just peace…peace and quiet. But I was strangely okay with that. I knew that He knew what He was doing.

It wasn’t until we were about halfway through our early morning trek to the next city down the highway that the strangest thought hit my head and heart: Valley of Dry Bones. I couldn’t shake it: Valley of Dry Bones. Well, alrighty then…I had no idea which direction to take or how a painting of a skeleton would be edifying in a worship environment – ESPECIALLY ON MOTHER’S DAY, but if I’ve learned anything, it seems that the crazier the idea, the more Him it usually is. So I opened up the passage in Ezekiel and read this:

I don’t remember any of the music that the worship team played, but my heart was stirred…that usually happens when I step into the zone. But I do remember painting a skeleton reclining in the dirt, but it wasn’t scary or heavy with death. It felt hauntingly lovely. Vines sprung up from the dry earth beneath, covering it in green leaves and flowers…symbols of life and beauty. Wind from above swirled about, like the very breath of God blew through those bones…driving out the raven of death that would pick away every last hope of life.

And just like that, it was over. We only sang 3 songs…but I was told that I could paint throughout the entire service if needed. But surprisingly enough, when the 3 songs were done, so was I. As I sat down for the service, I wondered “What was THAT all about?!”

Enter Debbie. Church Administrator and announcement sharer extraordinaire. But she interrupted herself mid-delivery to say, “I just can’t stop looking at that painting!”

After service, a soft-spoken man approached me as I was cleaning up my supplies to say, “You have NO IDEA how this painting speaks to what many in our church are going through right now.” Confirmation. It wasn’t such a crazy painting after all. (Skeletons in a church service must be more okay that I would’ve imagined.)

Debbie made her way through the crowd to ask if she could take a picture of the painting with her cell phone so that she could have it to look at later on. She blended back into the lingering group of people and re-emerged with her husband…and wanted to know a bit more about the painting. How did I paint like this? What did it mean? So I shared with them about the Valley of Dry Bones and the symbolism of each element. She stood quiet for a moment and broke her silence with, “You don’t know anything about my story, do you?” I answered that I knew nothing, and she proceeded to share.

Seems two years ago, Debbie’s oldest son went in for a standard checkup, and it was discovered that he had cancer of the thyroid. He’d had it removed and after treatment was doing much better.

Two months ago, Debbie’s youngest son was complaining about his chest hurting and doctors discovered a very rare form of lymphatic cancer.

Two weeks ago, Debbie found a lump during a routine breast exam and, after consultation with her doctor, was informed that she had the exact same rare form of cancer that her younger son had.

The family had been through the wringer, but what struck me was Debbie’s peaceful assurance. She wasn’t afraid, she was confident. She wasn’t questioning God’s protection, she was resting in His love. She wasn’t doubting His faithfulness, she was celebrating His goodness in spite of all of the scary stuff happening in her family’s life.

Truth is, I don’t know Debbie all that well, but I know this: that kind of assurance only comes from wrestling those demons of fear and doubt back to the pit that they came from. She had anchored her heart into the immovable unshakable truth of God. She REFUSED to believe the lies that ‘Our bones are dried up, and our hope is lost; we are indeed cut off.’

I fell so in love with her undaunted courage that I sent the painting home with her. It was rightfully hers anyway…God-breathed in every way. They hung it in their home as a reminder to trust that God’s Beauty and Life would show up in the most desperate places.

This story doesn’t have a Hallmark ending…Matthew fought hard against his cancer – his sweet, young bride and family by his side throughout the whole journey. Friends stormed heaven’s gates with prayer and worship until they physically lost their voices, every treatment was tried, every option exhausted. And on the morning of March 13th, 2020, 23-year-old Matthew went home to be with Jesus.

The family was heartbroken and to this day they mourn and grieve in such beautiful ways.

But here’s the kicker that’s hard for some to wrap their brain around: Matthew’s death didn’t change the truth about God! It didn’t alter His character or mar His stellar reputation – God is still good, He is still faithful, He is still the Bringer of Hope and the Giver of Life. He still brings beauty to our brokenness and breathes life into our dry and weary bones.

The painting now has new meaning to me…and I’m sure to Debbie’s family. These tabernacles of flesh are just temporary dwelling places. And by a divine act of grace God breathed healing and new life into Matthew and gave him a body that would know no sickness or pain.  Beauty sprang up from the dust and Eternal Life triumphed over fear and death…‘that ALL may testify that He is the Lord.’

The thief comes only to steal and kill and destroy. I came that they may have life and have it abundantly.

This site uses Akismet to reduce spam. Learn how your comment data is processed.