Let’s be honest:  we’ve all lost far too many friends to cancer.  I’ve been to way too many funerals for friends that had so much life yet to live.  A few years ago our neighbor was given the terrifying news that her discomfort and bloating were due to ovarian cancer.  Something none of us ever want to walk through.  But instead of laying down and letting her life come to a grinding halt or feeling sorry for herself, Shannon did something completely counter-intuitive…she reached out instead of turning in.  She decided to make a difference and created Teal Diva.

Her idea for Teal Diva was to rally women who had been diagnosed with gynecologic cancer and create a network that would strengthen, encourage, educate and increase awareness.  And when I say idea, I mean a great big hairy gotta-be-half-crazy kind of idea.  They’ve made men run races in tutus and teal stilettos, done countless 5ks, coaxed area restaurants to serve teal color-inspired fare, organized local salons to offer teal manis & pedis with part of the profits going to the cause, and even gotten the good people at Duke Energy to light up their famous skyscraper with glowing teal neon.  Oh, and did I mention the video?  It’s perhaps one of the most touching videos I’ve ever seen about women who are fighting through this life crisis with depth and dignity.  It’s so good, it’s winning all kinds of awards.  Rightfully so.  Do yourself a favor:  take a little time, grab some tissue and watch the video.  It’s time well spent.  For reals.

Oddly enough, the idea for this painting was birthed on a visit to take food to one of my own friends who was going through chemo.  I was just taking her food…but I was absolutely stunned when she answered the door.  I’m not kidding when I say:  she was breathtakingly beautiful.  Her chemo had caused her hair to fall out, but she had wrapped her bald head in a chic black and white head wrap that draped down over one shoulder.  She looked more like someone from Hollywood than someone fighting the ravages of cancer.  I know she probably felt the most UN-beautiful at that point in her journey, but on my trip home I just couldn’t shake the thought:  SHE WAS SOOOO BEAUTIFUL!!!

So after talking over the hedge with Shannon one night I decided to do a series of paintings featuring BEAUTIFUL Bald Women as a tribute to the women who are fighting the brave fight against all types of cancer…and as a declaration of the truth that they are all beautiful…and brave…and strong.  And as a good neighbor, since I’d hatched the idea with Shannon, I felt it was only fitting that I start with a painting for the Teal Divas.

There was a certain weight about painting this one.  It was personal.  There are people I care for deeply who are in the middle of their survival story…and I’m just so honored to be able to give them tribute with canvas and paint.  Tomorrow it’s going to be auctioned off at a local fundraising event…and I hope it sells for a million dollars.  I mean it.  I wish some philanthropist would see it and throw down a check with lots and lots of zeros at the end of it.  Every single one of the women who have been given a diagnosis deserve that kind of response…that kind of respect.

So if you know someone who is fighting gynecologic cancer, you might want to pass this on to them.  If you like it enough to want one for yourself or for a friend or loved one, I’ll be selling prints…and of course, I’ll be giving a portion of the profits to Teal Diva so that they can help to encourage more women and give them the kind of care and understanding that only comes from people who’ve been through it first hand.

The girl in this painting is based on the touching story of Talia Castellano, a young girl who became a YouTube sensation amid her fight against cancer…mainly because she had spunk and mad makeup skills…and a “never quit” attitude.  She was one of those extraordinary people who will forever represent bravery, strength and beauty to me.  So this one is for ALL Teal Divas out there…with a loving nod to the sassy Little Miss who wouldn’t even let cancer steal her joy. 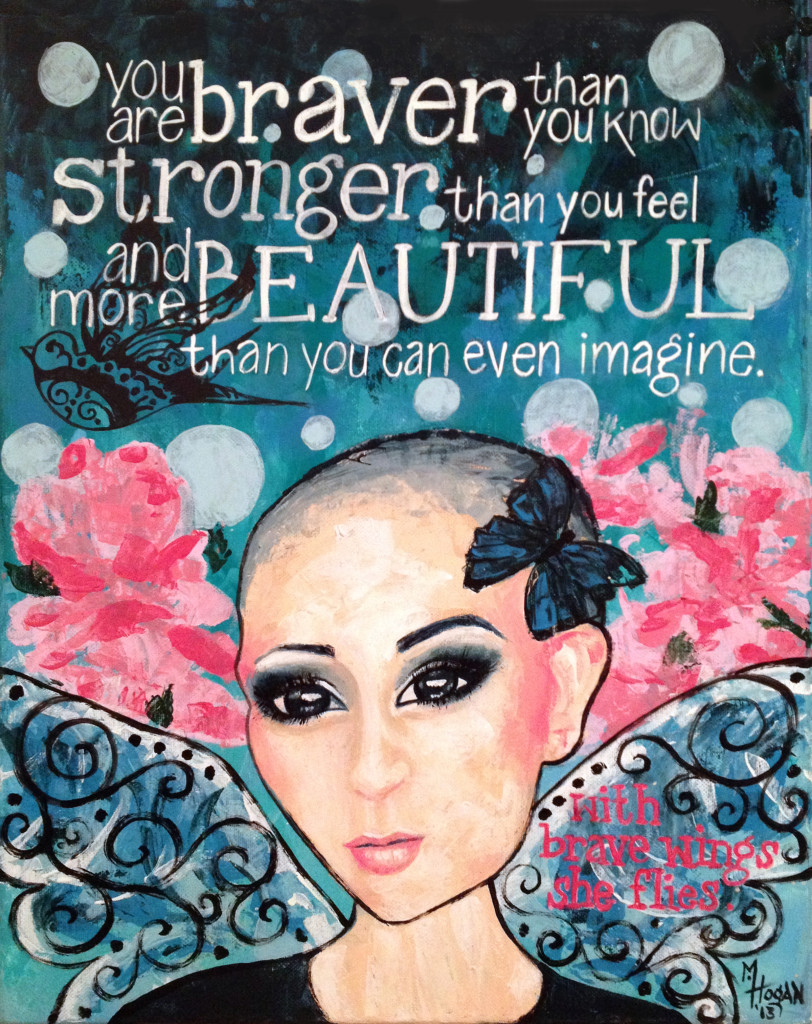